Steamy Historical Romance Sure to Heat up Your Holidays!

It's the time of year that brings out so much excitement for so many people – so why the heck is it always so danged stressful as well? I shouldn't laugh, but it's true, am I right? In the midst of the holiday madness, it's important to take some time to unwind and regroup, let go of the frustration your gift list always seems to ignite. What better way to do that than lose yourself in some super steamy historical holiday romance? Check out these books and anthologies – either for yourself to indulge in a little "Me" time, or for the historical romance reader on your gift list. There is so much to choose from: 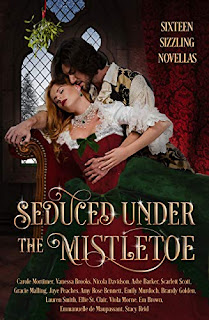 Seduced Under the Mistletoe

From the snowbound Highlands to candlelit ballrooms, follow our feisty heroines as they unmask secret identities, scorn etiquette, and defy danger. See them submit to fierce warriors, sinful scoundrels, and masterful lords. This boxed set is only available for three months, so don’t miss out. Indulge in sixteen all-new novellas that will leave you longing for more than twelve nights of Christmas.

Yuletide Yielding – by Ashe Barker
Trusting Her Highland Laird – by Brandy Golden
Duke of Christmas – by Ellie St. Clair
A Christmas Masquerade – by Vanessa Brooks
Peril with a Prince – by Emily Murdoch
Her Mistletoe Promise – by Jaye Peaches
Mistletoe Mistress – by Nicola Davidson
The Gentleman’s Seduction – by Lauren Smith
Bastian’s Surrender – by Carole Mortimer
My Lady of Misrule – by Amy Rose Bennett
A Wicked Christmas Wish – by Em Brown
A Bluestocking for Christmas – by Viola Morne
The Marriage Game – by Gracie Malling
Wicked Deeds on a Winter Night – by Stacy Reid
The Night Before Scandal – by Scarlett Scott
Master of the Moor – by Emmanuelle de Maupassant 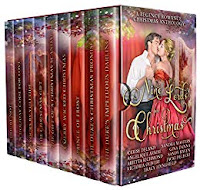 Attempting to mend a broken heart by indulging in an affair with a rakehell would not be the wisest course of action for a young lady of the ton. But when Miss Lily Godwin has a chance encounter with the mischievous Lord Nash at a Yuletide house party, she is sorely tempted to throw all dictates of decorum out the window. After all, it’s Christmas.

Author’s Note to Readers: An Improper Christmas is Book 3 in the loosely linked, Improper Liaisons Novella series. It can also be read as a stand-alone. This title also appeared in the limited edition Hot Winter Nights box set released in 2017.

You are cordially invited to a house party at Hexthorne Manor, the country estate of the Duke and Duchess of Avonleah. While gathering to celebrate Christmas with the duke and duchess, the members of the ton will indulge in their most wicked desires. Witness the scandalous Christmas encounters of the lords and ladies of London, as they escape to the country for a bit of revelry, a dash of indulgence, and a healthy dose of scandal.

Part One: A Christmas Masquerade
At a ball hosted during their Christmas house party, the Duke and Duchess of Avonleah sneak away for a bit of privacy. With social obligations and motherhood stretching Margaret Rycroft thin, her husband hopes that a night away from it all will be just the thing she needs. Little do they know, some of their guests have similar plans, or that their garden maze will be transformed into a hotbed of debauchery by their houseguests.

Part Two: A Christmas Most Scandalous
Quite some time has passed since Sheridan Cranfield, Viscount of Perth, has shared a woman with his wife. Yet, he senses that Cecily has become possessed with the desire to seduce a widow of the ton—a woman rumored to enjoy the pursuits of both men and women. Joining their efforts at the Christmas fete, the viscount and his wife set out to claim the widow for a night of passion.

Part Three: A Gift for Penelope
Lady Penelope Ingham is loath to have to attend the duke and duchess’ Christmas house party alone. However, with both her husbands seeing to their duties—one as an ensign at the War Office, the other attending the family estates and lands—she is left with no choice. Despite missing Colin and Edmond dearly, she throws herself into enjoying her time at Hexthorne Manor. Unbeknownst to her, someone at the ball has plans of their own for her… a temptation much too scandalous to resist.
https://www.books2read.com/u/47knpa?fbclid=IwAR2-jowvBpvdR4D3bTw8XHs_TS67HLObkiymWG7Zk8Ug00EkZWjcpnFUcG0

As Christmas approaches, and the snow falls deep, Lady Ophelia's life is in danger.

A malevolent force stalks the ancient corridors of Castle Kintochlochie, in its remote Highland glen.

Is the castle really haunted?

Someone, or something, is determined to derail Ophelia's love affair with Hamish, so ruggedly handsome, yet wildly unsuitable.

She must call upon her wits — not just to discover the culprit... but, perhaps, to escape murder.

Head to the Scottish Highlands for this delightful 1920s romp, filled with humour and romance, and a page-turning mystery to solve.

'Highland Christmas' is the second in Emmanuelle de Maupassant's 'Highland' series, set between WW1 and WW2

A Christmas Brothel: A Set of Canterbury Christmas Tales

It is a dark and snowy Christmas Eve and the roads are impassable. Canterbury’s inns are full, but the door of the local brothel stands open and Frau Klaus welcomes all who come seeking shelter. Gather with the stranded travelers around her Tannenbaum as they share secrets, holiday tales and stories of love.

100% of Author Royalties To Be Donated to TOYS FOR TOTS

And keep an eye out for these upcoming releases, perfect to indulge in after the festive madness winds down:


The Rogue Prince is Book 1 in Royals of Cardenas, a historical romance series set in the fictional kingdom of Cardenas, following the lives of the royal Rothchester family.

A rakehell prince …
Third son of the king of Cardenas, Prince Damien Rothchester is known for his drinking, gambling, and whoring. Knowing he will never inherit the throne, he goes about life feeling purposeless. But when he steps into a glittering ballroom on the night of his twenty-fifth birthday, the roguish young prince’s life will be forever changed.

A fiery Gypsy dancer …
When Esmeralda Amador steps into the king’s ballroom to perform for the prince’s twenty-fifth birthday, every eye in the room is upon her. One pair of eyes intrigues her most of all … those of Prince Damien, seeming to stare straight through to her soul.

The two know nothing can ever come of their attraction; he is a prince, and she a Gypsy dancer. Yet, neither can seem to resist the passion that sparks when they are together, or the unmistakable call of destiny forcing their lives onto the same path.

However, love is not the only thing destiny has in store …
With a deadly plot against the royal family surrounding him in danger and intrigue, Damien will face a decision he never thought he would have to make. Will he step up to claim a responsibility that should never have fallen to the third son? Or will he abandon it to risk all for love?
https://www.amazon.com/gp/product/B07JK2G2FF

Posted by Gianna Simone at 8:00 AM No comments:

5 Paddles for In the Devil's Arms (Claimed by the Devil)

A born-and-bred Jersey Girl with Brooklyn roots, I still live where it all started. I married my very own alpha male many eons ago, and until recently, was a full-time working mom to two school-age children. Still the mom – no longer the worker. Still, free time is always at a premium, and I spend the bulk of it lost in the worlds of my own making. I love to read and write hot, sexy and emotional stories about people both glamorous and not-so-glamorous. And some of them are even downright un-heroic, which is part of what makes them so sexy, in my opinion!

On those rare occasions when I am not writing, you can catch me playing in my other favorite alternate worlds of Highlander, Harry Potter, Charmed, and DragonBall Z! Yes, I know, an odd combo, but they all feature some of the sexiest villains ever. New to my obsessions are Vikings (from the History Channel) and Sleepy Hollow. And let's not forget my beloved NY Rangers. I find hockey players to be the real men of sports - and of course, I'm partial to the bad boys! lol

Norseman's Deception is a Finalist!

Some very exciting news came in tonight and what a way to kick off November! Norseman's Deception, Book 2 in The Norsemen Sagas, is... 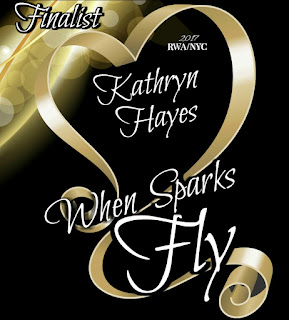 In the Enchanter's Arms is a 2014 Golden Leaf Finalist! 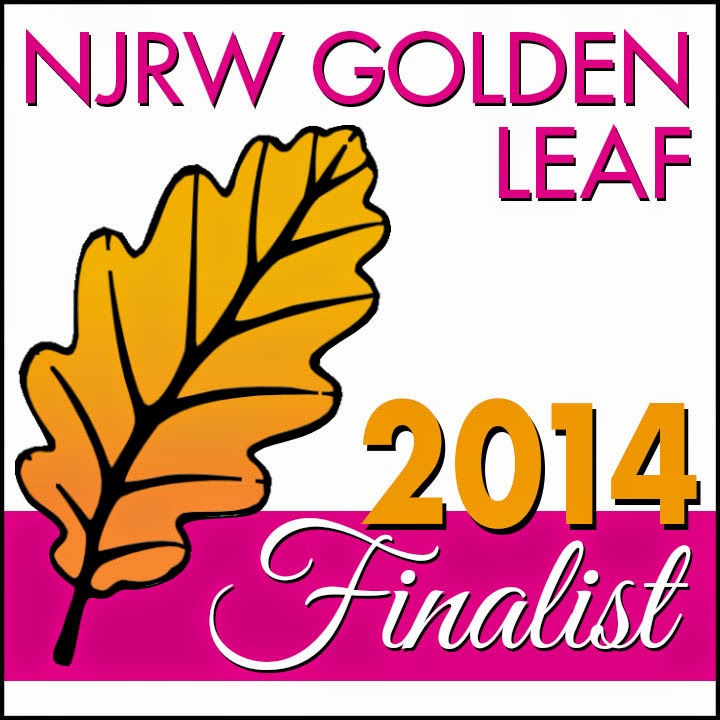 Formerly Claimed by the Enchanter

Magically Kinky! Stay tuned for updates on the re-release!